As the year comes to a close- oh god oh god, stress, fire, oh no kill it, kill it!

Well now that’s over with, I think doing the thing I did last year with this summary is definitely a good structure, splitting it into what I achieved and supported in 2019, then the goals I have for 2020. It’s truncated because I value somebodies time (not my own, evidently) so this won’t be too long, I hope.

The book a week commitment is a great idea to start the new year with and a great goal to consistently miss. All told this year I’ve finished 30 books, not bad but not absolutely fantastic. 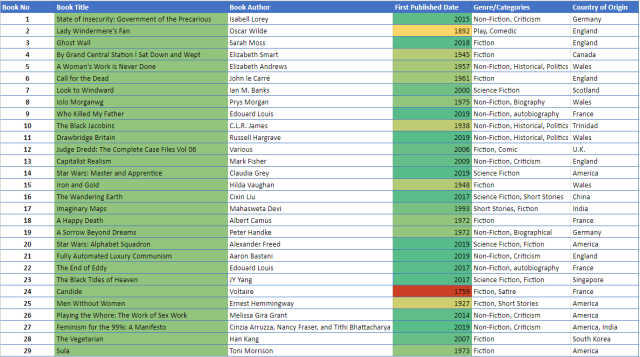 Down from the last year’s count at 43 but this fails to include the books read as part of my Degree, some of which I’d already read and some of which I haven’t ‘finished’ per-se,

If I had to pick one that that more people should read it would be ‘Who Killed My Father’ by Edouard Louis, a deeply personal and affecting book that highlights the falseness of dividing real life and politics, they are one and the same.

Films, evidently are easier to consume than books! Although the list I drew up for myself at the beginning of the year has evidently had an effect, up from 35 to 46 films. Some of which were outside my usual fare. Although there’s still a lot of big budget films in there.

The two particular standouts are ‘Knock Down the House’ and ‘FYRE: The Greatest Party That Never Happened’, both documentaries but with very different tones.

This list system is handy isn’t it! I didn’t have too much time for games this year but in the last few weeks with a few moments I’ve finished a decent chunk. I say finished because there are plenty of games that I’ve started, like ‘Celeste’ or ‘Baba is You’ that I just never got around to completing. ‘Celeste’ I have lots of complicated feelings on and I got to the last section of the game through the year and I may yet go back to finish it. 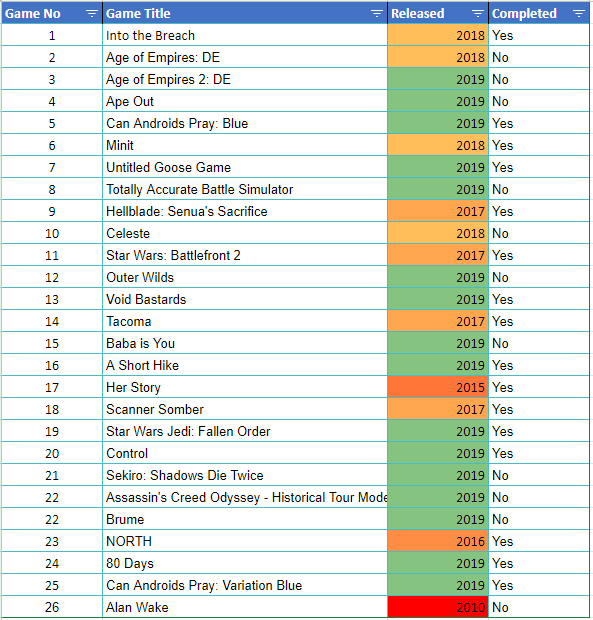 So, for those keeping track, 30 books, 46 films and 16 games!
The games I wanted to have played in 2019 were ‘Into the Breach’, ‘Tetris Effect’, ‘Gris’ and ‘Astro Bot: Rescue Mission’, of those I’ve only gotten around to Into the Breach, definitely still want to check out the others though.

Music still needs work. Will get back to you on that.

This year I’ve doorknocked, taken photos, been to Welsh Labour Conference in April and then National Conference in September. Elected as Chair of the Llandaff Labour branch in June, launched the Cardiff Left Bookclub in August.

There were other things, successful and unsuccessful election campaigns, nights in the rain and the wind, editing videos, running social media channels.

I also, on a political and on a pure “Oh no what have I done” note, applied and started my Masters in Welsh Government and Politics this year.

I will be attempting the 52 books reading challenge again, it’s going to be particularly tricky going into the 2020 but we can only try.

The gender balance of the books was better this year but by no means perfect (11 by women, 16 by men) so as before, I can and must do better going forward.

I’ve transferred the ones I didn’t get to in 2019 to a 2020 list but I’ve still got further to go on this front. I’m going to need to take some time and add to the list.

I’m pretty happy with where I’m at on games, the new consoles will be coming out next year and I’m planning a trip to EGX partially based around seeing some of those games in person.

As above so below, need to work on it.

Well my Master’s needs to be done, so that’s going to be it’s own special hell of business.

This entry was posted in Uncategorized. Bookmark the permalink.