The apocalypse seems to be played out more in contemporary literature and culture concerning American than any other. This blog will not delve in to the arguments of what the lure is for depicting the American (Western) 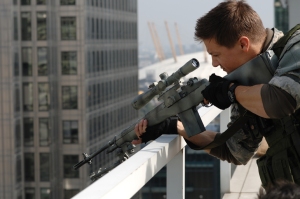 apocalypse. An American apocalypse is generally the envisioning of a renewal, that is to say a return to prelapsarian origins; seemingly only possible through  something as monolithic as an apocalypse. 28 Weeks Later is a British film based on the repopulation of London under the supervision of the Americans. Though played out in Britain it is easily recognisable as Baghdad’s Green Zone but with British civilians. The film was a hit in the American box office; the backdrop of Britain is both foreign and familiar and part of its success. The American occupation of their Iraq allies helps to display the complexity of post 9/11 America and its angst. Polemic arguments have been raised in opposition to America and her allies in their neoliberalism of what we call Emanuel Wallerstien’s world-system. Neoconservative enterprise compromises the global society by prizing capital over humanity. ‘Historically Zombie cinema had always represented a stylised reaction to cultural consciousness and particularly to social and political injustice.’ This is carried through into 28 Weeks Later where the human life is put second to that of the raising of capital through the repopulation of London. The film also raises features of risk society and the irony of assuming that it’s possible to manage unknown risk. In this context the film is the result of American shock and awe and an apocalyptic envisioning of the fall out of pre-emptive preventions of unknown risks.

28 Weeks Later is the sequel to Danny Boyles rage virus apocalypse of 28 Days Later set in London. The geography of the film is dominated by Britain’s sub-nervous banking system of the City of London and Canary Wharf. The film establishes the banking district as the heart of London and subsequently the foundation of the new society through reoccurring shots of the HSBC building and other monuments to capital. This restricted zone separate from the populace is opened up as a Green Zone for the migrants who have come to repopulate Britain. The narrative is played out through the microcosm of the family nucleus who take residence with other economic migrants in the Reuters Plaza in Canary Wharf, the building provides an allegorical link to the migrants as frontiers men. Establishing shots of St. Paul’s frame the City of London as part of the repopulation project Danny Boyle considered it the ‘garden of Eden’ for the reestablishment of Britain. True to form, the rational scientist (medical officer) Scarlet is ignored in her objections to repopulation and the officer in charge presumes the risk insufficient considering the preventative measures taken. Here the capital of the financial system takes precedent over risk which is presumed to be safeguarded against despite the unknown nature of the virus. Does this suggest that, ideologically, the film sees capitalism as irrational?

The zombie mode produces a fictional space which plays with the tensions of a body politics and the individual. The zombie is metaphorically both the alterity of outside threats and a refraction of the populace and individual depending on what the writer/director wants to convey. ‘In most cases, the zombie – unlike the seductive vampire, the duplicitous wolf, or the pitiable Frankenstein’s monster- lacks any traits evoking humanity (other than its human like shell).’ The zombie becomes ‘an allegory of a menace that cannot be sated or appeased, only annihilated: an existential threat of the first order.’ 28 Weeks Later uses 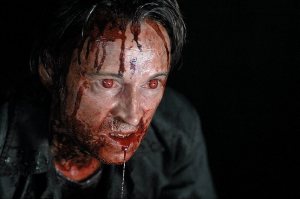 the zombie as a means to highlight civilians as both fodder and potential threat suggestive of the Iraqi and Afghanistani civilian. One of the film’s opening shots of repopulation is through the crosshairs of a U.S. sniper looking in on allied civilians. This prophetic scene and conceit of America’s homeland security angst, given London’s financial centres transferable parallels to Manhattan. The features of globalisation and unknown risks of modernity tie in with the zombies’ reclassification of space and deterritorialisation of the cosmopolitan. Issues of zombie politics inculcate globalisation with the modern dilemma of threat and risk, which is evident in the rise of zombie films post 9/11.

The tropes associated with Zombie body politic are strong representations of the American post 9/11 paradigm. The paradigm has caused polemic evaluations of America’s position in world history. The current de facto ideology neoliberalism has produced what Naomi Klein coined Disaster Capitalism through the unfettered free market and political fundamentalism. Klein sees this as a threefold movement of privatization, deregulation and cuts to social spending which end in the redistribution of wealth amongst the rich through the exploitation of catastrophe and disaster for capital gain. Ulrich Beck outlines the global risk society of America and the western economies the angst of the unknown and the fatal irony drawn out of the pursuit of safety. Risk society is the possibility of economic and environmental deficiencies as well as the potential catastrophe of International terrorism. The two theories produce a reading of capital taking being raised unscrupulously via ambivalent notions of world risk.

The evocation of new terminology from the political discourse of the war on terror creates an analogy between the Iraq war and the film. Code Red is the protocol to follow if the rage virus enters the Green Zone invariably the infection is passed from Alice to Don in an act of revenge with calamitous results. Code Red is a system created to cull the spread of infection and starts with containment of the 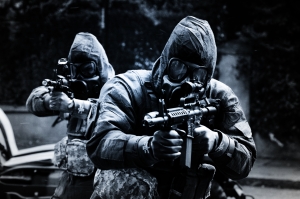 populace in holding cells reminiscent of Guantanamo Bay. Code Red, in its final stage brings the foreboding scene of the civilian in the snipers crosshairs full circle; in the melee which ensues America cannot recognise friend or foe. ‘While as far as the Americans are concerned, the Europeans are suffering from environmental hysteria, many Europeans see the Americans as struck by a terrorism hysteria’. The genocide of the migrants in 28 Weeks Later through the firebombing and chemical gassing of London, is an allusion to the weapons of mass destruction which protect and threaten the western world. Through the lens of disaster capitalism and risk society the genocide of the migrants is an American apocalypse of democratic freedom; propelled by an economic policy which pursues profit through disaster and a denial of uncontrollable, unknown risk.

28 Weeks Later sets out to comment on the Iraq war and in doing so exposes some of the features of America’s angst and neoliberalist imperialism. The film conflates America’s foreign policies and capitalist economic sensibilities to produce a narrative of potential global apocalypse. America’s approach to the risk of infection runs analogues to the modern risk society and its outcomes. Where the risk is quelled through action based on the unknown the action taken will be unintelligible as either positive or negative. ‘Global risks have two sides: the probability of possible catastrophes and social vulnerability.’ This is shown through the film’s disaster capital led holocaust of British migrants committed by the American military and the zombie.

This entry was posted in Tim Lewis. Bookmark the permalink.